‘The Prevention of War’

Students of Christian Science do not take sides, and the reason will become obvious. From a human standpoint most things in experience involve a choice between alternatives, with people on each side feeling intensely about the choice that they have made. This is all illustrated today by the divide between those who feel a pre-emptive attack on another and supposedly threatening nation, and those who abhor this concept. The former look at history and point out the consequences of moral weakness, and unwillingness to take action in time which has led, as in the case of World War II, to disproportionate suffering later. The latter, often including those who have actually fought in a war, feel that it is a course that is both obscene and fruitless. Both sides produce arguments in their favour.

The student of Christian Science works within different parameters. He certainly does not ignore issues and do nothing about them. But he does recognise that any peace evolving from war has proven not to last. This is for two reasons. First, it leaves the basic division of the combatants into conqueror and vanquished, and this itself sows the seeds for renewed conflict. Second, and metaphysically basic, war has always been an attempt to deal with phenomena, rather than the carnal mind which is behind phenomena. This, like the decapitation of the Hydra’s heads, leaves the body untouched. The student knows it is more important to begin with the spiritual fact that right is, rather than a debate about what is right.

Readers will have noticed that Science and Health deals with only three chapters in the book of Revelation and, for the purpose of this article, it is the twelfth chapter that is important. We read that it “typifies the divine method of warfare in Science, and the glorious results of this warfare. The following chapters depict the fatal effects of trying to meet error with error” (568:5-8 and margin). These following chapters, from 13-20, show in detail the self-imposed suffering of error destroying itself. If the lesson of the twelfth chapter is learned, this experience of self-destroying error is avoided and, as we see in the textbook, we move straight to chapter twenty where the new heaven and new earth are revealed.

In the twelfth chapter we learn that the conflict between the flesh and Spirit ends because “against Love, the dragon warreth not long” (567:7-13). There is nothing maudlin about this Love, for it refers also to Principle which enforces its own conditions. We see how the Lamb slays the wolf because “innocence and Truth overcome guilt and error” (567:31-1). Spiritual innocence does not fight but, through self-abnegation, it lays down “all that error would claim to see and fight” (568:30-32). In true Love, there is no accuser, no accused, no accusation. We find that in the presence of this Love “the dragon is at last stung to death by his own malice” (569:25-26). We read that the attempt of the material lie to make war upon the spiritual idea “only impels the idea to rise to the zenith of demonstration” (565:23-26). And we are assured that “the spiritual idea was arraigned before the tribunal of so-called mortal mind, which was unloosed in order that the false claim of mind in matter might uncover its own crime of defying immortal Mind” (564:19-23).

As students, how do we do our work responsibly? Again, this chapter tells us in the words “at all times and under all circumstances overcome evil with good. Know thyself, and God will supply the wisdom and the occasion for a victory over evil. Clad in the panoply of Love, human hatred cannot reach you” (571:11-19 and margin).

To know oneself as divine idea is only possible from the standpoint of the divine Mind which has the idea. This self is the “glorious self that I had with Thee before the world was” (John 17:5). This self is the compound idea of God which is man including the universe. This self is as present and infinite as God Himself, contains no divided, disruptive element, and in its presence all pretence of another or an alternative is reduced to mesmerism and nothing else. Only in this reduction can we then refute both evil phenomena and the so-called mind behind them.

At this moment it is of the utmost importance that we reject, in our own thinking, all belief that the harmony of the universe can be threatened or invaded, because error is already preempted by Truth. This is a mental conflict only and takes place as thought. And we affirm that intelligence, as the primal and eternal quality of infinite Mind, alone governs. Right is intelligence. Warfare is error because, ultimately, it is not intelligent. 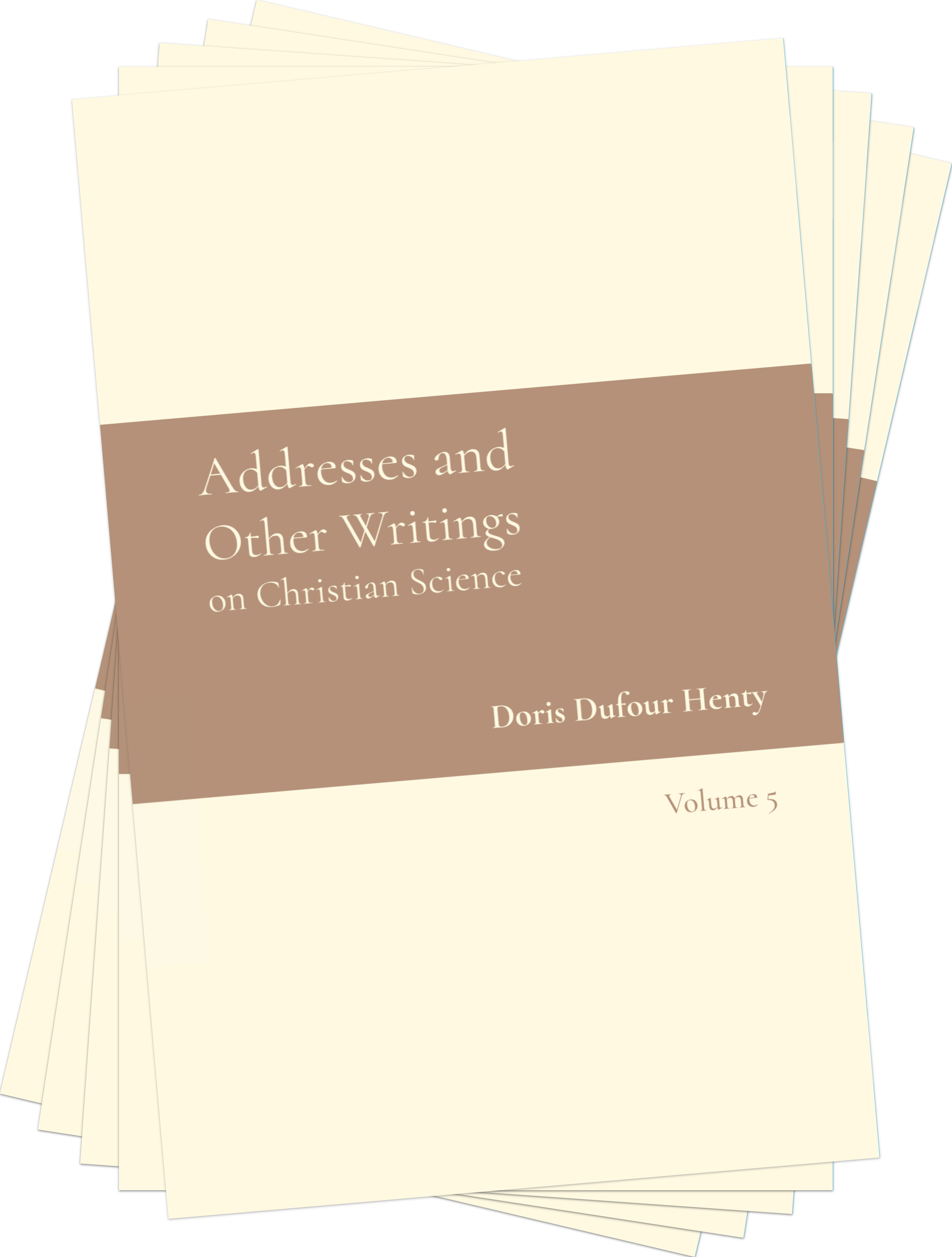 Mulberry Press is pleased to announce that Doris Henty’s Addresses and Other Writings on Christian Science is now available as five slim volumes ideal for travel.