As Mind is All, and thereby all-inclusive, Mind is exclusive of nothing, and nothing is excluded from Mind. The proper way to define that which suggests itself as being different from the Love and infinity that are Mind, is not as things or persons or entities but as a misinterpretation of that which is. This is the case concerning the smallest false suggestion as well as concerning that suggestion shaping itself as a so-called external universe peopled by millions of persons, animals, countless things, and incredibly and complexly moving around in stellar spaces.

Divine oneness and indivisibility is misinterpreted by personal sense into the plurality and divisibility of men and things.

Divine eternality and continuity is misinterpreted by time-sense into the restrictions of past and future, and the disruptiveness of a time-now.

Divine infinity and integrity is misinterpreted by material sense into the limitations and resistance of matter and its disintegrating and deteriorating tendencies.

Oneness is the indivisibility of the infinite.

Eternality is the self-continuity of the spiritual now.

Infinity is the all-inclusiveness of the divine here, excluding anything dwelling outside, or objectively.

What appears as the world’s sense of security and well-being will increase by our seeing that the essentials for life, freedom, and happiness are infinitely, everpresently, continually available.

Mrs. Eddy has presented us with the final revelation of religion and science in one: God’s allness as infinite, indestructible good; the consequent nothingness of evil; the Christ-derived ability to experience as one’s own self all the goodness of God subjectively, by getting rid of a mistaken sense of existence. There is, indeed, nothing beyond this to be revealed.

Eternity, not time, reveals it; in other words, the subject has to be approached not as a future attainment, but as a present spiritual acknowledgment. See Science and Health 3:14: “To understand God is the work of eternity, and demands absolute consecration of thought, energy, and desire.” And, equally, only the Father, not the son, knows it (Mark 13:32: “But of that day and that hour knoweth no man, no, not the angels which are in heaven, neither the Son, but the Father”). The revelation is from the standpoint of Principle, not from the standpoint of idea, in accordance with Science and Health 272:28-29: “The divine Principle of the universe must interpret the universe.”

Thanks to this revelation, we know that man, including every- thing beautiful, lovely, good, joyous, harmonious, tender, clear, crystal, is not a material phenomenon, “of few days, and full of trouble” (Job 14:1), but the forever, the immutable, the eternal in nature and essence.

On the other hand, whatever appears as evil and ugly, fear-provoking and perverse was never a thing that was caused or made by God, and thereby able to persist in its perfidy and perversity. It was never anchored in the chain of causation; it was always mortal mind: “nothing claiming to be something . . . a suppositional material sense, alias the belief that sensation is in matter . . . the subjective states of error; material senses” (S&H 591:25-8).

And then in logical consistency with her humility in ascribing all power, presence, consciousness, entity to God and to God alone, Mrs. Eddy came to the final, breathtaking conclusion that, contrary to all material sense testimony, man was not a weak speck bewilderingly beholding the unchartable vastness of a stellar universe, on the one hand, and, on the other hand, trying to pierce through the unaccountable complexities of the atom—a thing nobody has ever seen. No, man was discerned to be universal as well as immortal, being “the compound idea of God, including all right ideas” (ibid. 475:14-15), “the full representation of Mind” 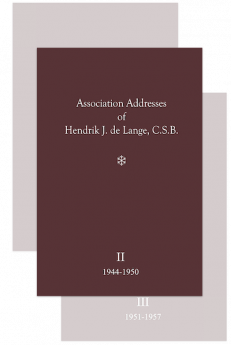