View cart “Five Papers from The Christian Science Revolution in Thought” has been added to your cart.
John Hargreaves

Five Papers from The Christian Science Revolution in Thought

Reflection (30 minutes)
It is seen that reflection, far from being a separate entity from God, is actually constituted of the Mind that does all the reflecting. Man therefore has no capacity of his own, any more than the image in a mirror, but shows forth all his parent-Mind is knowing and being. Reflection is the spiritually mental activity of the divine Mind. Man is that activity: he is not a reflector.

The Eyes of Elias (23 minutes)
Elias is defined in Science and Health in part as “Christian Science with which can be discerned the spiritual fact of whatever the material sense behold.” Since the capacity to discern resides in Mind, and there is nothing to discern but this Mind-manifest, what appears as an inversion of the truth is a wrong perspective, or point of view, and not an alternative to the truth. Spiritual discernment is not engaged in struggle or alternatives.

Thy Son Liveth (17 minutes)
Taking the story of the nobleman whose son was healed by Jesus, we see that the human longing to bring Truth down to a material condition, in order to do something to it, has to yield to the understanding that the only Son, the only consciousness, the only state of being, lives as total wholeness, completeness, and harmony now. It is the affirmation of the spiritual fact that heals and not the attempt to do something about a material condition. We do not ask, What can I do? but ” What are the facts?”

The Christ Treatment (27 minutes)
All metaphysical treatment starts and stays with the fact that the infinite is one, not two. The parable of the Prodigal illustrates the basic mistake of believing in two sons, two kinds of man, two sorts of anything. It is this divided sense of life that takes man into a far country. The Father, or divine Principle, of man knows no duality, since man consists of God’s thoughts, and thoughts cannot escape or deviate from the Mind that thinks them. True “treatment”, therefore, does not work about problems but sees the spiritual fact in their place. Only thus do problems fade out.

Church Universal and Triumphant (40 minutes)
The one Church is defined in part as “the structure of Truth and Love”. This structure of thought “rests upon and proceeds from divine Principle”. Nothing proceeds from this divine Principle but the divine Mind’s own thought, and so the only church is a spiritually mental structure, consisting not of persons with personal minds, but thought that proceeds from the Principle, or first cause of the universe. In this sense it would be correct to say that the terms “Church” and “man” are really synonymous. This talk is especially meaningful for those who are concerned about events today that seem to point toward a diminishment of “Church” when church seems to be needed more than ever. As always, John’s insights are firmly based on the Bible and Mrs. Eddy’s writings. 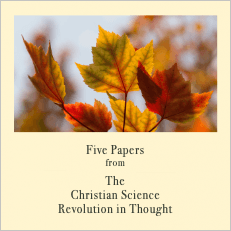 You're viewing: Five Papers from The Christian Science Revolution in Thought $10.00
Add to cart