Presentations for a Seminar in Los Angeles

In 1999, John Hargreaves was invited to present insights on Christian Science to a Seminar in Los Angeles. John’s remarks were intended to stimulate discussion in each of the seven sessions.

He starts with an explanation of Christian Science as a “new perspective” rather than a religion and challenges thought to leave the old goalposts of educated beliefs or conventional perception and religion. He takes each of the next six subjects — including “Church” and “Christian Science Mind-Healing” — to reveal the truth of these ideas as seen from this new perspective.

The progressive unfolding of what IS, is not a factor of an improved material sense of things but IS the divine Mind shining through the mists of ignorance, melting them and revealing a clearer, freer, happier and healthier awareness of what already exists as Mind’s idea. 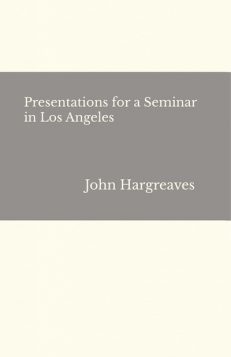 You're viewing: Presentations for a Seminar in Los Angeles $10.00
Add to cart