It is with distinct pleasure that Mulberry Press has the opportunity to reproduce this collection of letters by Katherine V. Chase, whose practice spanned several decades of last century in an era when human thought was feeling Truth’s own challenge to cherished beliefs about the existence of either a patient mind or a practitioner mind.  Readers will recognize each letter as presented in a language appreciable to thought in that crucible of melting beliefs.

The author’s career had been that of a practicing pharmacist, one of the very few women admitted to that profession at the period.  Over time, her intelligent observations led her to disillusionment which then led her to Christian Science.  Eventually, she met and then became a student of Dr. Hendrik J. de Lange.  For a long time she was a Journal-listed Christian Science practitioner but ultimately dropped her listing and proceeded independently.  The original publishing of this collection of Mrs. Chase’s letters was furthered by the warm appreciation of friends who found in them inspiring explications of truth.

“Having one God, one Mind, one consciousness, — which includes only His own nature, — and loving your neighbor as yourself, constitutes Christian Science, which must demonstrate the nothingness of any other state or stage of being.” (No.38:19)

The comments and questions concerning “giving” in your last letter are well worth exploring. As you say, the human sense of giving always whispers “depletion.” Last Christmas a young man of my acquaintance who had opened his own business earlier in the year, was feeling this suggestion of depletion by reason of the unwarranted demands of policemen, firemen and various suppliers of services. He was feeling this burden to be a kind of illegal taxation on living. It was a “you-pay-up-or-we-can-put-you-out-of- business” proposition. In short, to him it was tribute money, and the circumstance made him very resentful.

Domination by those petty Caesars of today is neither more nor less legitimate than was the domination of the ancient Hebrews by the reigning Caesar of their day. We all seem unwilling captives of a spurious system of government.

The recognition that Jesus seemed to conform to the giving of tribute money was a helpful hint to our friend, opening the way to further enlightenment. The Master did not make the mistake of victimizing himself by refusing to pay the tax money, nor yet by waging a one-man crusade against the evil. Mrs. Eddy warns of the futility of such a course in Miscellaneous Writings 355:16-18:

“To strike out right and left against the mist, never clears the vision; but to lift your head above it, is a sovereign panacea.”

Paying the tax money was a human obligation that had nothing to do with the Christ-living, and so it was not permitted to deplete Christ Jesus. His understanding of his true selfhood was such that he was able to tell the disciple to take the money from the mouth of a fish. He said, you recall, “Render therefore unto Caesar the things which be Caesar’s, and unto God the things that be God’s.” (Luke 20:25) In other words, let Caesar (personal sense) have the destructible objectification of Caesar’s sense of substance. If Caesar hoarded it, it would do him no good. If Caesar spent it, his measure of abundance would be reduced, for the material thing the money purchased would be as destructible as the medium.

Pondering these circumstances, our friend realized that there was no passive acceptance by the Master of the suggestion that he must pay the money in order to live and be permitted to operate in a completely harmonious way. Neither could he have thought that the payment of the unjust levy was a medium to provide the continuation of his freedom of movement.

Reading the account in the Bible, one is impressed that he did not grumble or complain about the inequity and injustice of the demand. Nevertheless, study of his words and his works reveals that he never dealt with evil passively or permissively, but ever confronted evil with Truth. Here, the parable of the barren fig tree comes into focus. When something appeared that was of an unproductive nature, he did not ignore it nor withhold the rebuke that reduced its suggested presence to nothingness. The fig tree was verdant and beautiful but it was not fruitful. Cursing the fig tree, as Matthew 21:19-21 indicates, was simply the demand of Principle that every idea of Mind afford proof of its usefulness. The curse is really Love’s pronouncement of I AM ALL, enforcing conformity to perfection.

To whine and croak and complain about that which is suggesting itself as unlike Principle, is mere complaint without confrontation. Complaint is poverty, as one of our hymns indicates, because it deprives one of the satisfying realization of Allness. One must then, in a manner of speaking, be willing to curse the barren fig tree — the inharmonious situation — by acknowledging the fundamental fact which obtains right where the barren fig tree seems to stand.

It is right at this point where we come in view of the true sense of giving, that of appreciating everything from the standpoint of Truth itself. Correctly appraised, since Mind is All, all true giving proceeds from Mind, but is never an act of transference. It is Mind giving of itself to itself, or is Mind’s infinite self-appreciation as self-sufficiency.

The story recorded by John of the woman of Samaria talking with Jesus at the well ( John 4:9-29 — please read it in its entirety) illustrates Christ Jesus’ scientific sense of giving. Up until the time of her conversation with the Master, she had been concerned with giving only in its human material aspects — that of the transference of something thought good and desirable. When Jesus said, “Give me to drink,” she revealed her materialistic standpoint by her localization and limitation of herself as “a woman of Samaria” and in her repeatedly unsatisfied seeking for the gift of human love and appreciation. How very gently the Master rebuked this mistaken sense by showing that giving is really worship, that is, right identification. It is axiomatic that the thing which we worship is the thing with which we identify ourself. This identification must exalt from the worship of persons and things to the worship of or identification with and as Principle.

I find it difficult to capture the spirit of this sense of giving in mere words, but it opens up the most exquisitely satisfying experience of gift-giving I have ever known. Now one’s gift-giving has meaning. No longer is it the result of some sudden generous impulse, nor does it imply reciprocity — giving something to get something. Gift-giving becomes diffusive: it gives to every aspect of the God-universe the beauty, order, and grandeur of perfection “due His holy name.” It imbues everything appearing in the scope of our awareness with all the qualities of the God-being. It pervades all existence with the fragrance of joy. Thus it effectually refuses and refutes seeming misconception and perversion. This is our way of cursing the barren fig tree.

Believe me, darling friend, this is the most meltingly exquisite feeling one can ever experience. In this kind of giving, pictures of persons fade out, as does the possibility of misplaced trust. It is seeing as Love sees, it is letting Love do our loving, tenderly, fully, cherishingly. It means lavishing love without the least taint of expecting some return for that love and loving. Love, giving of itself to itself is never depleted, and is not aware of the need of some outside circumstance to complement or satisfy.

Such giving most assuredly dispels the fretful, complaining whine of a personal sense that would say, “When there is trouble, I am in the midst of it, but when they are handing out the plums I’m just not there.” Why does it dispel this fretful sense? Because one is no longer thinking of oneself as a willing recipient of largesse, or as a person who has been passed by in favor of another, nor yet as one who has only a part inheritance. In the blessed sense of giving presently unfolding, one is so at one with the Love that is doing the giving, that one realizes that he himself is doing all the loving, all the giving. 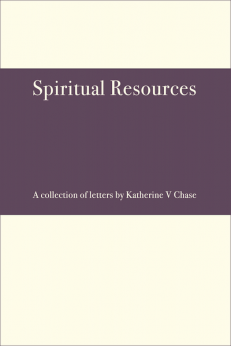